Two haiku comps that I just couldn't pass up!

As a result of my long stays in hospital, and now the months needed to recover, I'm not chomping at the bit to submit haiku to any publications or enter competitions. I'm taking as much time as I need to process all that I've been through, to heal physically, emotionally and spiritually, and I know that much poetry and other creative ideas will come from this. In fact, it's already happening.

I'm currently designing my own set of affirmation cards. But back to the reason for this post: Two haiku comps that I just couldn't pass up! Why you ask? Not only are they FREE to enter, they both also have an online entry form that makes it just so easy!

The first is the Kusamakura Haiku Competition, which closes September 13, 2010. You can enter up to two poems. The amazing first prize is an air ticket to Kumamoto, accommodation, and ¥50,000. Winners are announced in mid-November and the awards ceremony is on November 27. A magazine containing all entries will be sent to winners in late February 2011 and winning haiku will appear on the website. You can find all the information and past winners here: http://kusamakura-haiku.jp/boshu/index_e.html (see on-line entry form at bottom right-hand corner).

The second is the Haiku International Association Contest, which closes September 15, 2010. You can enter up to two poems. Last year I received and Honorable Mention in this competition. Winners are announced November 26. The results will be published in the HI Journal and on the HIA website. You can find all the information and past winners, along with the online entry form here: http://www.haiku-hia.com/cont_en.html
Posted by Kirsten Cliff at 9:30 AM No comments: Links to this post

Are you thinking about organising an event for writers? Maybe you'd like to put together a poetry anthology? Is it your dream to study writing at university?

The Max Foundation for NZ Women stems from the Max chain of retail stores, and could be a source of funding for your next literary arts project.

“In the spirit of believing every woman should have the opportunity to be the best they can be, we've created a charitable trust called the Max Foundation for New Zealand Women. The aim is to support women (or groups of women) whose actions enhance the wellbeing and advancement of New Zealand women.” http://www.maxfoundation.co.nz/

Summer 07/08 saw them grant Sophie Prebble the full fees of her Masters of Creative Writing in Scriptwriting at Victoria University. You can check out her story here: http://www.maxfoundation.co.nz/default,100,summer_0708_recipients.sm
Posted by Kirsten Cliff at 4:35 PM No comments: Links to this post

I came across The Literary Gift Company when reading Joanna Preston's blog this week and I couldn't resist going straight to the website.

I wasn't disappointed! Filled with glorious delights for book lovers, this UK company is into wares that recycle old books, and began out of a family book selling business.

These people are the real deal. They have jewelry, kitchen items, clothing and stationery, amongst much, much more. I want you to go and discover it for yourself, but will tempt you just a bit further with three that took my fancy...

They even have a haiku t.shirt, which I find funny and offensive all at the same time. Let me know what you think. Cameron has challenged me to write a better one. I haven't yet accepted.

August is their first birthday so it's discounts all round. Just type 'dickens' in the 'voucher code' section at the checkout for your 10% discount. I put my first order in today so will let you know how it goes. 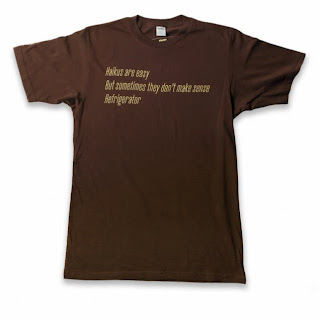 Posted by Kirsten Cliff at 7:09 PM 2 comments: Links to this post

Three opportunities I have come across recently for my scripwriting/filmmaking friends out there...

Script to Screen and Show Me Shorts are calling for applications for the 2010 Short Film Lab. If you are a budding film writer or writer/director and are developing ideas for short film, then you won’t want to miss this amazing opportunity to take part in our inaugural Short Film Lab. Participants in the workshop will be mentored by experienced industry practitioners who have excelled in short filmmaking, including producer Ainsley Gardiner (Boy, Eagle vs Shark, Two Cars One Night, Tama Tu), writer/director Mark Albiston (Run, The Six Dollar Fifty Man), and screenwriter, producer and academic Shuchi Kothari (Firaaq, Apron Strings, Coffee and Allah).

Up to six writers (or writer/directors) will be selected to workshop their short film ideas during the full-day lab on Saturday 6 November in Auckland. Those selected can come on their own or can bring up to two key creative collaborators along with them. Thanks to the support of the New Zealand Film Commission, participation in the Short Film Lab is free for all selected applicants. Application Deadline: September 10
http://www.script-to-screen.co.nz/2010/08/2010-short-film-lab-how-to-apply/


The Beginners Guide to Screen Writing

Joanne Rye McGregor (Tauranga Film Collective) and Nyree Sherlock (Continuing Education Adviser) have teamed up to bring you this weekend workshop at the University of Waikato in Tauranga. The tutor is well-known scriptwriter Kathryn Burnett. Dates: 21st - 22nd August. Cost: $60 for a weekend of intensive learning. Workshop participants don't need to have previous writing experience. Find out more and enrol online:
http://www.waikato.ac.nz/pathways/community/tauranga/cce_screen.shtml.
Posted by Kirsten Cliff at 9:36 AM No comments: Links to this post

Hello, hello! It's good to be feeling well enough to start blogging again :)

The world of haiku has been chugging along while I've been in hospital, and the fruits of my labours in late 2009 and early 2010 have now come to fruition. So while I wasn't doing much writing, the past months have seen me receive third place in the Katikati Haiku Contest 2010 (judged by Sandra Simpson), two haiku published in the haikai pages of Bravado 19 (edited by Barbara Strang), and a haiku in, what ended up being, the final issue of moonset. I also saw my first ever tanka published in Valley Micropress (Vol13:Is3) and had my angel photo appear on the following month's VM cover (Vol13:Is4).

I was in between hospital visits when the Katikati Haiku Contest had its prize giving on June 6th so was able to attend and catch up with my fellow lovers of the Japanese poetry forms. The Katikati Haiku Pathway was also celebrating its 10th anniversary that wet and wonderful day and you can read a write up, complete with pics and the winning haiku, here: http://www.poetrysociety.org.nz/node/502 . The Wai Taiko drummers were thrilling once again, but hearing them indoors this time round was a full body experience!

The biggest haiku event, however, to have put a smile on my face since returning to Wordsmith House is my invitation to appear on the Haiku NewZ 'Showcase' of talented haiku writers in NZ. I'm honoured that my name and haiku will sit alongside such great haiku writers, those whose work I have studied, aspired to; some I am lucky enough to have met and call 'friend'. You can see the 'Showcase' here: http://www.poetrysociety.org.nz/node/275 . I have to get organised and choose 10 of my haiku and write a short bio for my inclusion, which should appear online next month. Will keep you updated!
Posted by Kirsten Cliff at 4:29 PM No comments: Links to this post