I finally learnt how to use PhotoStudio editing software and can now put text on my images and manipulate my photos. It was a lot easier than I thought, and I had fun playing around with different fonts and techniques. The first one I made was the marrying together of my haiku and image that appeared separately on Head Lines NZ - 'taking a mental health day'. 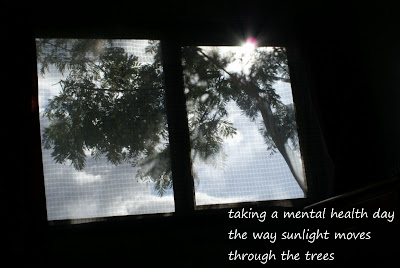 I have only done a couple more as I still favour making my haiga collage-style, and will be off to the Papamoa Market Day this Sunday to search for objects that will inspire my next creation.

My collection of haiku and tanka exploring my leukaemia journey is coming along at a steady pace. I have fourteen that are made into haiga, and twenty-eight polished poems overall. One thing is for sure: I'm growing out of my art space at a rapid rate!
Posted by Kirsten Cliff at 12:00 AM No comments: Links to this post

New Links to My Writing this Month

During November, I've had two pieces of writing appear on-line.

First, is a poem, My Depression is a Room, on Head Lines NZ, which I wrote a couple of years ago. It's one of those pieces that I knew would find it's right place in this world given time. Thanks to editor, Jodine Derena Butler, for accepting my work yet again. I'm pleased to support this project, and encourage other New Zealanders with any experience of mental illness to take part, or take a look. Jodine's personal poetry blog is Poetry Out West.

The second, is an article, You've got to have faith: Inspirational art from Janet Keen, that was published in Bravado 16 in 2009. It's an interview of friend and colleage, Janet Keen, and she has kindly put the article up on her blog. I did a few issues as Bravado's 'roving arts reporter' but sadly this Tauranga produced publication has now closed. A big thank you to Janet for giving my article another life. Check out her blog for creative ideas, inspiring quotes and colourful posts. Below: Bravado 16 cover art by Janet Keen.

Posted by Kirsten Cliff at 12:00 AM No comments: Links to this post

The Touchstone Awards for Individual Poems will be bestowed annually on haiku and senryu that represent a noteworthy addition to English-language haiku in the estimation of a distinguished panel of haiku poets, editors and scholars. The inaugural Awards are open to any English-language haiku or senryu published in calendar-year 2010. Each author of an award-winning poem will receive a commemorative stone with their poem and name engraved on it, emblematic of his or her contribution to the foundations of English-language haiku.

Each poet may nominate no more than two poems, only one of which may be the author’s own work. I've submitted my nonimations. Have you? The deadline for submission is December 31, 2010. And it's so easy to do with the on-line entry form.

Posted by Kirsten Cliff at 9:59 AM No comments: Links to this post

Email ThisBlogThis!Share to TwitterShare to FacebookShare to Pinterest
Labels: haiku, The Haiku Foundation

Side Stream Calls for Submissions

Side Stream 'Poetry from the Fringe' is looking for more submissions and has extended it's deadline for Issue 27 to Friday 28th November. This issue will be a joint effort by Jason Morales and Anna Kaye Forsyth, two long-time Side Streamers. Send your best short poems to sidestreamnz@gmail.com

My partner, Cameron Elliot, was the cover artist for Issue 26 with Ere the Storm. Congratulations, Cameron! 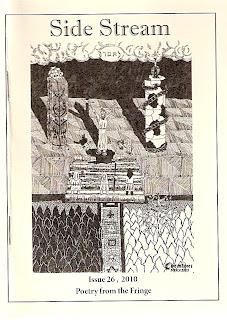 Posted by Kirsten Cliff at 7:08 PM 2 comments: Links to this post

The story of my leukaemia journey so far (complete with haiku, of course!) is now up on the Leukaemia & Blood Foundation website. You can read it here.

Meanwhile, I'm continuing to write at least one haiku or tanka a week that speaks of my journey, and I have made fourteen into collage-style haiga. My collection is coming along nicely, but most of all, it's therapeutic value is something money can't buy.
Posted by Kirsten Cliff at 2:26 PM No comments: Links to this post

Cara Holman is one of my haiku buddies and is a fellow cancer survivor. She told me about the kukai comps she was involved in a few months back and I've since had the joy of watching her success. I knew she could do a much better post on this topic than I, so I asked her to be my first guest blogger. Her enthusiasm for writing is a delight to be part of and I thank her for this contribution to Swimming in Lines of Haiku. Take it away, Cara...

I discovered Kukai contests in much the same way I’ve discovered everything of worth in cyberspace: by serendipitously following links. The first Kukai I discovered was the Shiki Monthly Kukai. What is a Kukai? Simply put, it is a peer-reviewed haiku competition, in which anyone who submits a haiku gets to vote.

Here’s how it works, in more detail. The Shiki Monthly Kukai has two divisions: the “Kigo” and the “Free format”. In the former, the kigo provided must be included in the haiku, along with a seasonal reference. In the “free format” section, the haiku may be set in any season. Sometimes the word provided must be used verbatim; other times, the only requirement is that it be “strongly imaged or implicit”. A writer may submit one haiku to either or both sections.

Shortly after the submission period ends, ballots are distributed to each participant with the haiku listed anonymously. Each participant has 6 points to distribute, in increments of 1, 2, or 3, and they may not vote for their own haiku. Finally, the votes are tallied, and the haiku are listed in ranked order, along with the writers’ names, points, and any comments they may have received. In addition to the Shiki Monthly Kukai, two other Kukai that I regularly participate in are the Sketchbook Kukai and the Caribbean Kigo Kukai. These are some of my favorite Kukai entries from this year:

What is novel about Kukai contests, is that unlike traditional haiku journals or competitions with a single judge, Kukai are “judged” by all of the participants, creating a kind of vox populi effect. Kukai are also inclusive—anyone can participate, and everyone is made to feel equally welcome—whether this is their first haiku, or they have been writing and publishing haiku for years. The best way to get started with any of these Kukai is simply to familiarize yourself with the rules, read the past few months of results to get the “flavor” of that particular Kukai, and start writing! 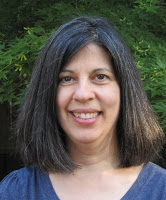 Cara Holman lives in Portland, Oregon, with her husband, the youngest of their three children, and their two cats. She finds inspiration for her haiku in the garden and on forest trails. Visit her blog, Prose Posies, for links to all of her writing, including her creative nonfiction.
Posted by Kirsten Cliff at 1:19 PM No comments: Links to this post

Interview using all of your senses.

When doing a face-to-face interview, don't just hear what the person is saying, 'listen' with all of your senses engaged. Look at the way their eyes light up over certain topics, the way the sunlight picks up different colours in their hair, the smell of their home or perfume, the background sounds of children, pets or music, whatever you can pick up about that person and their situation from their surroundings.

Taking in all these aspects when interviewing someone for an article (which is what makes up half of my freelance writing work) brings to life your experience of your time with that person. The reader gets a more rounded view of the interviewee, and your article is more enjoyable to read as it is richer, deeper.

A Tanka for Leukaemia Appeal Week

This week is Leukaemia Appeal Week (Nov 1-7) in New Zealand so I'm sharing the first tanka I wrote in hospital while having chemotherapy for Acute Promyelocytic Leukaemia (APML). This tanka was first published in Kokako 13, September 2010

walking to work
they kiss
before parting:
the nurse turns left
the doctor turns right

﻿﻿﻿﻿﻿ ﻿﻿﻿﻿This photo was taken as part of the Leukaemia Appeal Week campaign, photographed by TJ Alderson in conjunction with the Leukaemia and Blood Foundation. It's of me with my mum and sister in my favourite second hand bookshop, Browsers, in Hamilton.

You can see other leukaemia survivors and read their stories by following this link, as well as some facts about leukaemia and details of how to donate online and go into the draw to win a Farmers gift card worth NZ$100!
Posted by Kirsten Cliff at 7:23 PM 2 comments: Links to this post

The Haiku Foundation is pleased to announce its first-ever haiku contest on Facebook! It starts today and will run through to the end of November 2010. This contest is FREE.

Jim Kacian, the founder of The Haiku Foundation, will be judging and will offer a copy of this year’s Red Moon Anthology for the top three haiku. Anyone may enter one haiku by posting it in the comment section of the post about this contest on The Haiku Foundation Facebook page.
Posted by Kirsten Cliff at 3:34 PM No comments: Links to this post