The Broken Latch: A Rengay with Aubrie Cox

rain ripples
across my skin
fibromyalgia

finally home
I sink into tears

no moon
my sleepless night
of silent prayers

thoughts tangled
in the thickening fog

lost butterfly
the broken latch
on this pill box

This rengay was written from our shared experience of living with the chronic illness Fibromyalgia.

Posted by Kirsten Cliff at 9:00 AM No comments:

kids dolphin dive
under the waves

message in a bottle
the wind steals
my words away

forgotten castle
the first touch
of this foreign sea

This fun rengay was written for Aubrie Cox's latest Yay Words! Project "Sea Bandits". You can download your own copy of this great new collection of haiku, tanka, haibun, haiga and other short form poetry here. My thanks to Aubrie for the inspiration, and to Cara for exploring the themes with me via rengay. Enjoy! :)

This was my entry for the 38th Caribbean Kigo Kukai held in September 2012 with the theme: Stormy Weather.

Congratulations to the winners, and my thanks to Gillena Cox for running this kukai each month. You can read all the haiku here.

Posted by Kirsten Cliff at 11:46 AM No comments:

Linked Haiku & Tanka in LYNX: A Journal for Linking Poets

I've been busy behind the scenes the last few months and this work has come to fruition in three linked verses now available for your reading pleasure in LYNX XXVII:3.

"Between the Birdsong" and "All the Words that Mean Cancer" are both rengay sequences that I did via email with Cara Holman. Cara and I have written several rengay together this year, but these are our first longer linking verses where four rengay appear as one sequence. The Cancer sequence was very difficult emotionally to write at times, but we did it together and are both very pleased with the outcome. It's been published at a significant time as I have just completed my treatment for leukaemia and Cara is having her sixth anniversary of being diagnosed with breast cancer. I hope our writing about this will help a reader out there who is struggling with the realities of cancer.

The tanka sequence "Forever Home" is my first time writing linked tanka, and also my first time writing with Margaret Dornaus. This sequence is based our respective travel photos and soon we will each post our tanka with the corresponding images on our blogs (watch this space!). I thoroughly enjoyed writing with Margaret, and exploring tanka (hers and mine) at a deeper level. We are in the process of writing other tanka sequences based on our travels, so more from us coming soon!

My thanks to editors Jane and Werner Reichhold for publishing so much of my work in this current issue, and of being so encouraging and enthusiastic about each submission. My thanks also to my writing partners, Cara Holman and Margaret Dornaus.

Posted by Kirsten Cliff at 11:41 AM No comments:

I wonder what it would be like not to speak aloud for a whole day. No words. From my mouth. For twenty-fours hours. No songs, no soliloquies, no swearing. Out loud. No language of love or lament or loathing. Out loud. Or in whispers.

I'm sure I say more than is necessary. Maybe most of us do. But could I make it through a day without talking? And what would I learn from doing so? Is it possible to be overwhelmed by such an experience, by too much God? Or is there only goodness to be found through such a practise?

chemotherapy all the people I've lost along the way
contemporary haibun online vol 8, no 3 (October 2012)
Posted by Kirsten Cliff at 2:48 PM 4 comments:

To mark the first anniversary of Svetlana's passing (7 September, 2011) and to celebrate her life, a memorial kukai contest was run over the past few weeks. You can now read all the haiku and results of the voting here. My thanks to all involved.

singing dawn . . .
searching for your light
within these words
Kirsten Cliff
12th Place (5pts)
﻿
Posted by Kirsten Cliff at 12:59 PM No comments:

Is Haiku Your Cup Of Tea? Or Coffee?

Here's the haiku and photo mug I made my mum for her birthday. It was my first time doing this and I'm really pleased with how it turned out, so will definitely be doing it again. And mum loved it! :) 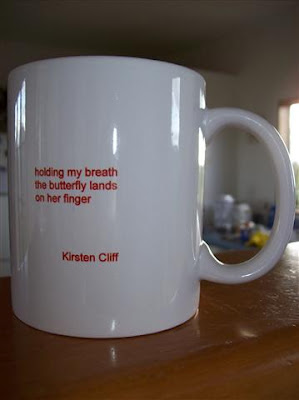 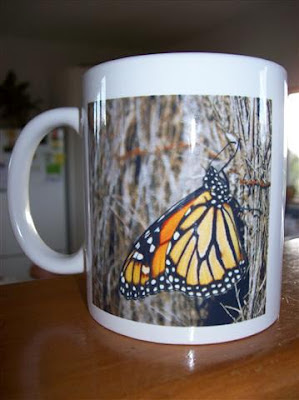 I ordered a second mug of the same design while I was at it so that I'd have one of my own. Just another way to make haiku a part of my everyday life! :) (Click images to enlarge.)

Posted by Kirsten Cliff at 4:42 PM No comments:

Results of two of the kukai I entered in August have come through and I'm surprised and excited to see that I took out third place in both! Many thanks to my peers for giving kudos to my work. :) 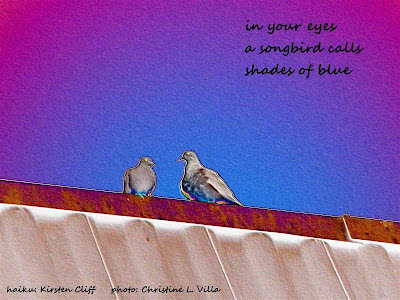 Third Place
2nd Haiku My Photo Challenge
Photo: Christine L. Villa
Congratulations to the first and second place getters!
I have entered a further two kukai: the Sketchbook Kukai and the Svetlana Marisova Memorial Kukai. My votes are in, and I look forward to seeing the final results. Doing kukai has been a new experience for me; one that I've found enjoyable and rewarding. I'd encourage everyone to give it a go.
﻿
﻿
Posted by Kirsten Cliff at 10:43 AM No comments:

Straight From the Haijin's Mouth #4

'Straight From the Haijin's Mouth' is one of the features that makes up my haikai column in a fine line, The Magazine of the New Zealand Poetry. This edition is from the March 2012 issue, and is reprinted with the kind permission of Laurice Gilbert, Sandra Simpson and Ernest J. Berry.

Straight From the Haijin's Mouth
I asked award-winning haiku poets, Sandra Simpson and Ernie Berry, 'What's it like to send your haiku out into the world?'

Sandra Simpson's answer: Selecting haiku to send to an editor or judge can be difficult – they’re all my babies, I love them equally.

As it turns out though, I love some more equally than others. With experience comes the knowledge that while some are “publishable” (but not outstanding) some are altogether better (and some we don’t discuss!).

Most editors like a set of 5-15 haiku which means I can try some poems that are a bit “different” in the mix. Re-reading submissions a month later is a good practice – the haiku often turn out to be not so great as I thought and go back through the editing process.

Getting to know a journal’s ethos helps, although editors can often surprise with their choices.

This haiku, for which I never had high hopes (thinking it was a bit obvious), was published in The Heron’s Nest and won a Touchstone Award for one of the best haiku published in English in 2010:

slicing papaya –
the swing
of her black pearls

The poems to which editors and judges respond are almost invariably (the above example notwithstanding) the ones where I have strived to be honest about the moment.

This haiku came complete while visiting Otago Museum and was a runner-up in last year’s HaikuNow! Contest (limit one haiku; a tough ask):

in the cabinet marked Mesopotamia a broken face

But I also have plenty of haiku that will never be published … and that’s okay. To write the good ones I accept that I have to write the bad ones.

Ernie Berry's answer: My first foray into the world of poetry was about age 5 when Aunt Haysl of Hay's Ltd in Christchurch saw fit to publish one of my poems in her weekly children's page of the Christchurch Star-Sun. 60 years later I started dabbling in poetry again as a retirement project in Mexico where the kindly editor of an American journal targeting snowbirds* was so impressed with my work that he appointed me 'poetry editor' and insisted I supply a new poem for every issue forthwith and recruit other poets from Mexico and California.

After returning to Godzone in 1993, a friend gave me a book of poetry titled Haiku Menagerie which proved a life-changer for me because it consisted entirely of 'haiku' a genre I'd never heard of till then but which catered nicely to my predilection for poetic brevity. I took to haiku like a duck to a frogpond and my first haiku was accepted for publication by an Aussie mag, Paper Wasp in 1995 and within 2 years I was being published in haiku journals in NZ, USA, Britain, Ireland, Belgium, Croatia and Argentina, etc., etc. Being published 'world-wide' and winning the odd contest was quite a thrill and has kept my nose to the grindstone of octogenarianism...

Posted by Kirsten Cliff at 10:00 AM No comments:

September 1st marks the beginning of Spring in New Zealand and above is the page I did for my family's calendar. The haiku first appeared with another photo last year in Notes from the Gean here (Sept, 2011), and appeared again this year in Kathy Nguyen's August Blog Bash! with her commentary here. However, the photo in this version was taken at the start of the Papamoa Hills walking track, near my old home, and was later printed in the local paper in the weather shots section. (Click on image to enlarge.)

August was a super busy month with writing, posting and reading haiku daily for NaHaiWriMo. It also was a month of medical appointments for me with several visits to the dentist (a 2nd tooth extraction tomorrow and then hopefully I'm done for a good long while!), a check over of all my moles before summer (no cancer lurking:), and most importantly, seeing my Haematologist at Waikato Hospital. I have now officially finished all my drug treatments for leukaemia. Unfortunately, I will continue my three monthly bone marrow biopsies for a further year because of the risk of relapse. But all signs point to it being done and dusted by next spring. Yay! :)

This month I've already had super news: I've been nominated by the community of New Resonance Poets to enter my work into consideration to join them in A New Resonance 8. Apparently, my haiku have been deemed outstanding and worthy of a wider readership, and I've been invited to submit 50-100 poems. 17 finalists (out of more than 40) will then be chosen to appear in the book. I am so excited and honoured and wowed! And already working on putting my large submission together! :)

Unfortunately, I wasn't able to get my haiku-a-day challenge ready to go for this month, but watch out for it coming soon! Enjoy your spring (or autumn!). This is my first spring in my new home and I'm loving seeing the countryside come to life again after winter with birds, green growth, and baby animals. Happy haiku writing!

Posted by Kirsten Cliff at 5:02 PM No comments: