Better than January resolutions... a river of stones is an international project organised by Fiona Robyn to encourage people to engage with the world through writing a short observational piece (a small stone) every day during January.

I have blogged before about Fiona Robyn's blogzine a handful of stones. Her creation of NaSmaStoMo (National Small Stones Writing Month) is a great way to bring new life into her 'small stone' philosophy and to engage the senses of people around the world.

Now you have two challenges to kick off 2011: NaSmaStoMo in January and NaHaiWriMo in February. So are you in? 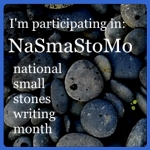 Email ThisBlogThis!Share to TwitterShare to FacebookShare to Pinterest
Labels: a handful of stones, a river of stones, Fiona Robyn, NaHaiWriMo, NaSmaStoMo, poetry